In the 1630s, the priesthood in France was in disarray. The parish priests were poorly prepared for their ministry, and most of the hierarchy, drawn from the aristocracy, were supported by endowments (benefices) associated with large land holdings.

Jean Jacques Olier, born to a wealthy family in 1608, was a well-educated young man whose miraculous cure from deteriorating eyesight pointed him away from the ranks of the aristocratic clergy and toward priestly service to God and the poor. His interactions with Church luminaries like Vincent de Paul, Charles de Condren and Mother Agnes of Jesus (St. Agnes of Langeac) drew him into the center of a movement for spiritual renewal and religious reform in France. 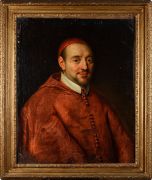 Father Olier wanted to reform the clergy—and eventually the Church in France— by providing sound formation for priests. He established a small seminary outside Paris in 1641. When he was named pastor of St. Sulpice in Paris, he moved the seminary to the parish and invited several other priests to join him in working at both the parish and the seminary. The "Society of the Priests of the Seminary of St. Sulpice" began and was dedicated to accepting adult candidates from bishops throughout France and forming them for priestly service in their home dioceses. In this, Fr. Olier is credited with developing a new model of seminary, as a place that started, not with local adolescents, but with men from different places, whose vocations had already been discerned.

A century and a half later, the Sulpicians’ success in seminary education attracted attention in the newly independent United States. In 1790, there were only 35 priests ministering to the 30,000 Catholics in the U.S. John Carroll, the first bishop of the U.S., asked the Sulpicians to establish a seminary in his see city of Baltimore. The Seminary of St. Sulpice, later renamed St. Mary’s Seminary, opened in 1791 and was the first Catholic institution of higher education in the U.S. (St. Sulpice opened one month before Georgetown.) In the early 1800’s, the Sulpicians at St. Mary’s Seminary helped Elizabeth Seton in the early stages of her apostolate with the Sisters of Charity, and Sulpician Fr. James Joubert worked with Mary Lange, a Haitian immigrant, to establish the first community of black sisters in the U.S., the Oblate Sisters of Providence.