On Friday November 27, 2015, Father Jean LONGÈRE, P.S.S., Archivist of the Society of the Priests of Saint Sulpice and renowned medieval scholar, was given the acclaimed First Gobert Prize in History at the prestigious Academy of Inscriptions and Belles-Lettres in Paris. 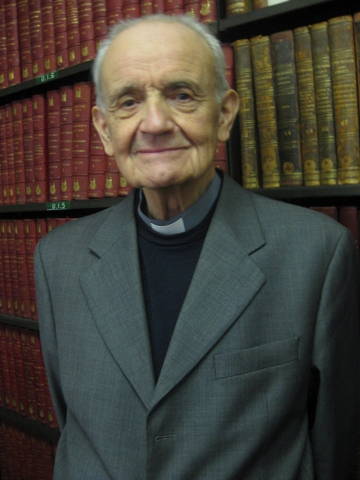 Jacques de Vitry was an important ecclesiastic in his day, preaching against the Albigensian heresy and encouraging the Crusades. He was a renowned preacher, and Pope Gregory IX created him a cardinal in 1229. Father Longère’s scholarship was able to correct some earlier mistakes in the study of de Vitry’s sermons, and his book is the first modern, critical edition of these reputed sermons.

A small private celebration for Sulpician colleagues and friends was held in honor of Father Longère at the Sulpician residence in Paris on Monday, November 30, 2015. The Society of the Priests of Saint Sulpice congratulates Father Longère on this great honor and on his esteemed reputation in medieval studies. Ad multos annos!