Today, the feast of the Birth of the Blessed Virgin Mary, sees the dedication of the restored historic chapel on Paca Street in Baltimore, site of the original St. Mary’s Seminary, the first Catholic seminary in the United States. This chapel, designed by the renowned architect Maximilian GODEFROY and originally dedicated in 1808, is the first Neo-Gothic church in the United States.

Founded in 1791 by the Sulpicians at the invitation of the first bishop of the United States, John CARROLL, the Paca Street site, which is still owned and managed by the U.S. Province of Sulpicians, has seen many changes. In the late 1960s the original seminary building had to be torn down because it was a fire hazard. The Province then donated much of the property to the city Baltimore to serve as a park in the historic Seton neighborhood.

A few years ago, a new welcome center for visitors was opened, and the exterior of the chapel was totally restored. In addition, improvements were made to the Mother Elizabeth Ann Seton House, which is on the property. Saint Elizabeth Ann is the first native-born U.S. citizen to be canonized. 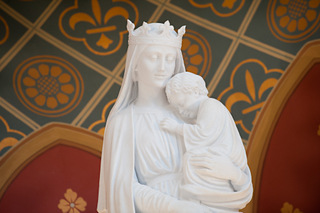 Now, thanks to the generous gifts of many alumni, friends of the seminary, and the U.S. Province, the interior of the chapel has been totally restored. Some photos are included below. A key feature of the restoration was also uncovering the sanctuary gravesite of the first Sulpician Superior of St. Mary’s, Father François NAGOT, p.s.s. In addition, a reliquary containing the heart of the third Archbishop of Baltimore, Sulpician Ambrose MARECHAL, p.s.s., is now visible on the left side of the sanctuary.

The historic site served as a seminary for many generations of seminarians. Among the many well-known alumni are such figures as Blessed Father Michael McGIVNEY, founder of the Knights of Columbus, and Cardinal J. Francis STAFFORD, recently retired Prefect of the Sacred Penitentiary in Rome.

The current director of the site, Father John KEMPER, S.S., manages it as a spiritual center for downtown Baltimore, as well as a pilgrimage site for Catholics and others seeking the roots of the Catholic presence in the United States.

We congratulate Father Kemper and the U.S. Province for taking on such an important task to preserve the heritage of Saint Sulpice for future generations.