On Thursday 31 March 2011, I was pleased to find in La Croix (p. 28), the daily French Catholic newspaper, an article on a Sulpician confrere who, at age 88, has become well known in Cyberspace. The title of the article reads: “At 88 years of age, the ‘Internet Pastor’ always preaches online.” Since the year 2000, Father Raymond d’Izarny (email: This email address is being protected from spambots. You need JavaScript enabled to view it.) who lives at Le Foyer de la Solitude, the Sulpician French Province retirement home in Issy-les-Moulineaux, has been managing an Internet site called “Le Cybercuré” (Internet Pastor). Based on his many years in parochial ministry, as well as his experiences in priestly formation, Father d’Izarny writes of a variety of contemporary themes. He addresses current religious topics of interest, for example, the beatification of John Paul II, the monks of Tibherine and the highly successful French movie, Des Hommes et des Dieux (2010),” which recounts a mysterious murder of a group of French monks in Algeria in 1996, and interreligious dialogue with Muslims and Jews.

Another aspect of his website is the focus on explanations of many aspects of the Catholic faith, a tool for evangelization of those who are not familiar with Christianity or Catholicism. In addition, Father d’Izarny makes many suggestions for parochial ministry, especially with regard to the liturgical year or various sacramental celebrations. 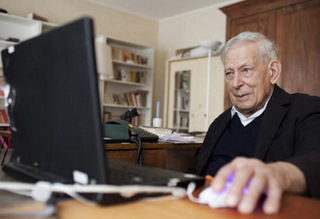 Father d’Izarny keeps very busy with this new ministry in his “third age.” He explains his steadfast interest in the World Wide Web with these words: “This site is my very reason for being at this point in my life. I don’t walk well anymore, and my hearing is bad, but my intellectual faculties are intact.”

Sometimes he works six hours a day at the keyboard, responding to email, fixing broken hyperlinks, and writing new articles. Originally intended for an audience in the diocese of Nanterre, where he resides, the site has expanded throughout the French-speaking Catholic world.

“When I launched Cybercuré, we only had 300-400 site visits (hits) a day. Today there are ten times as many, with records of 6000-7000 connections for Christmas, as well as a million visits per year.” When asked to explain the success of his site, his response was: “I stick scrupulously to the advice---write briefly and choose simple words…and, voilà, that’s why it works!” During my canonical visit to Le Foyer de la Solitude in January 2011, I witnessed first-hand how lively and open-minded Father d’Izarny remains at his advanced age. There is still the sparkle in his eye as he searches for new ways to preach the good news of the gospel of Jesus Christ.