On Saturday evening 20 November 2010, the Pontifical Canadian College honored Sulpician Cardinal Marc OUELLET, p.s.s., to acknowledge the assumption of his duties as Prefect of the Congregation for Bishops and President of the Pontifical Commission for Latin America, to which he was named by Pope Benedict XVI in June 2010.

The event began with a 7:15 PM Mass for the Feast of Christ the King, held at the Church of Saint Ann in the Vatican, with Archbishop Jean-Louis BRUGÈS, Secretary of the Congregation for Catholic Education, as the principal concelebrant and homilist. Other concelebrants included Cardinal Jean-Claude TURCOTTE, Archbishop of Montréal, Archbishop Richard SMITH, Archbishop of Edmonton, Bishop Pierre MORISSETTE, Bishop of Saint-Jérôme and President of the Canadian Conference of Catholic Bishops, and Sulpician Bishop Lionel GENDRON, p.s.s., who will be installed as Bishop of Saint-Jean-Longeuil in 27 December 2010.

The Canadian Ambassador to the Holy See, the Honorable Mme Ann LEAHY, also attended the Mass, which was followed by an elegant dinner at the Canadian College for fifty-three invitees.

Father Eric SYLVESTRE, p.s.s., Rector of the Pontifical Canadian College and General Procurator for the Society of Saint-Sulpice, hosted the event. In his opening remarks, Father Sylvestre reminded the attendees that November 21st is traditionally the patronal feast of the Society of Saint-Sulpice, commemorating the presentation of the Virgin Mary in the Temple. This year, however, the feast had been displaced by the fast of Christ the King, which is the last Sunday of the Church’s liturgical year.

In his closing remarks, Cardinal Ouellet recalled the importance of the traditional Marian feast for himself and for the Sulpicians. He invoked the image of Mary as a wonderful and very Sulpician model of accepting the Word of God in one’s life as a call to humble service. He also spoke of Pope Benedict XVI’s recently published post-synodal Apostolic Exhortation, Verbum Domini, which presents this same image of Mary as the humble servant of the Word of God.

The Superior General of the Society of Saint-Sulpice, Father Ronald D. WITHERUP, p.s.s., also attended the event and gave homage to Cardinal Ouellet at the beginning of the banquet. In his remarks, Father Witherup noted the cardinal’s consistent humble service to the Society of Saint-Sulpice and to the universal Church. During his years of priestly ministry, Cardinal Ouellet has performed an incredible array of ministries, encompassing seminary and priestly formation in Canada, Latin America, and Rome, and episcopal duties in the Roman Curia and as Archbishop of Québec and Primate of Canada. In the name of the General Council and all Sulpicians, he assured Cardinal Ouellet of the Society’s prayers and support in the assumption of his new duties. 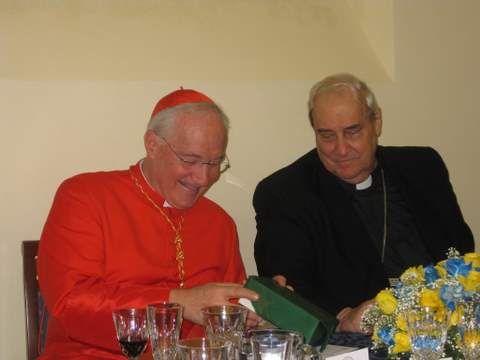