From 29 August to 3 September, 22 members of the French Province attended a retreat preached by our confrere, Mgr Georges SOUBRIER, Bishop Emeritus of Nantes. The retreat for twenty-two members of the Province was conducted in the beautiful setting of “La Part-Dieu,” a retreat house operated by Le Foyer de Charité at Poissy, a short distance from Paris, in the Diocese of Versailles. Among the participants was the Superior General, Father Ronald D. WITHERUP, p.s.s., and the Provincial of France, Father Bernard PITAUD, p.s.s. Using many passages from scripture, as well as pastoral examples drawn from years of ministry as a formator and bishop, Mgr SOUBRIER led the retreatants on a time of spiritual renewal based upon the call of Jesus to be faithful disciples. He covered many themes in the course of his conferences, giving emphasis to the invitation from the Lord to be priests, the mission entrusted to priests, the call to evangelization, and the need for spiritual growth at every stage in presbyteral ministry. The day before the end of the retreat, Father PITAUD announced news of the death of a confrere from the Diocese of Nantes, Father René GAUDRON, p.s.s, who had succumbed to cancer after a long battle. At the final Eucharist, at which Father PITAUD presided, his name was added to the remembrance of all the French confreres who had died in the course of the last year. 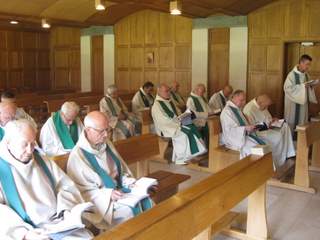