From February 25 to March 5, 2019 the French Province of Sulpicians held a Provincial Assembly at Le Grand Séminaire d’Issy-les-Moulineaux. A Provincial Assembly (equivalent to a “chapter” in religious orders) is the highest authority in the Province and is held only once every six years. This year seventeen delegates from around the world participated in the Assembly.

One of the chief responsibilities of the Assembly, in addition to setting priorities which then must be approved by the General Council, is to elect a new Provincial and Provincial Council. They will serve as the leadership of the Province for the next six years. In fact, the current Provincial, Rev. Jean-Marc MICAS, PSS, was reelected to a second term of office, which will begin in July of this year. Three of the current Provincial Consultors were also reelected for a second term: Revs. Henri de LA HOUGUE,PSS, Pierre KHANH, PSS, and Tryphon BONGA, PSS. Elected for a first time was Rev. Emmanuel GOULARD, PSS, who also happens to be the Rector of the seminary at Issy-les-Moulineaux.

Among the highlights of the Assembly was a solemn Sunday Mass celebrated at the Church of Saint-Sulpice in the 6th arrondissement of Paris, at which the Superior General, Ronald D. WITHERUP, PSS, presided, and a Mass celebrated by the recently ordained Bishop of Nanterre, Mgr Mathieu ROUGÉ. The seminary at Issy-les-Moulineaux is situated in the Diocese of Nanterre. The Assembly concluded on Tuesday, March 5 with Eucharist in the chapel of the seminary, followed by a banquet, both of which were attended by 45 Sulpicians from the area.

Pictured below is the new Council: 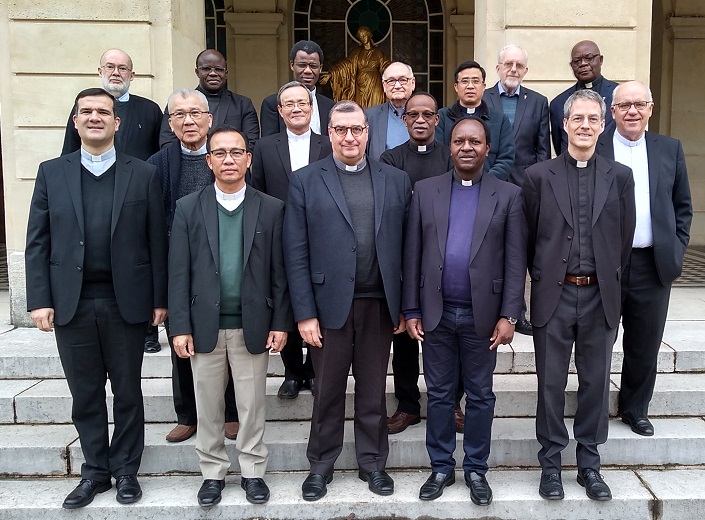 All the members of the Society of the Priests of Saint Sulpice salute this new Provincial Council and wish them every blessing in their term of office, which begins in July! May their ministry reflect the apostolic spirit so evident in the founder of the Sulpicians, Father Jean-Jacques OLIER!