As part of an art exposition titled Jews of the Orient, which was organized by the Institute of the Arab World in Paris from November 24, 2021 to March 13, 2022, we present here an overview of this astonishing Hebrew Bible from the 14th century.

Manuscript 1933 from the Archives of Saint Sulpice in Paris is a Hebrew Bible called the Foa Bible, named for the family that owned it from the 16th to the 18th centuries. In the absence of precise information that could explain the Bible’s origin such as a scriptorium or whoever may have commissioned it, we need simply to examine closely the document itself to be able to situate it in its context.

An illuminated manuscript from the Catalonian school

Detail of the script of the word Bereshit

The coat of arms of the Sanz family
Folios 6 (backside) and 7 (front) represent two magnificently decorated tapestries with a central rose image made with interlaced and stylized vegetation (see below). The four corners of these folios, much like the four corners illustrating the sacred vessels of the sanctuary (folio 5 [backside] – folio 6 [front]), contain coats of arms featuring a stylized wing. This motif of the wing is found in other Catalonian Hebrew manuscripts, as in the Sarajevo Haggadah. Cecil Roth has identified this image with the coat of arms of the Sanz family, one of the main noble families of Catalonia. This custom of including a family’s coat of arms in manuscripts figured rather strongly among the Jews in Spain. This motif is found in other Bibles or Haggadoth. The coat of arms of the Sanz family thus helps situate our Foa Bible in Catalonia. 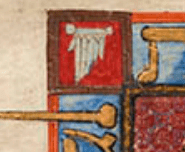 Detail of the coat of arms of the Sanz family

An architectural structure made of arcades and triple arches
The first pages of the manuscript contain motifs of illuminated arcades enveloped by threefold arches sitting on capitals supported by narrow columns. The entire structure surrounds columns of texts where the Masoretic lists of Ben Asher and Ben Naphtali are inscribed, in a manner of the canonical lists found in gospel collections. This was a common feature of medieval Hebrew Bibles. For example, the Perpignan Bible dating from 1299, or the Rashba Bible from 1383, have similar characteristics. Those of the Foa Bible are closer to the Catalonia Bible of the Duke of Sussex. Painted in vibrant blue, brilliant orange, and clear mauve and yellow hues, the arcade’s columns of the Foa Bible alternate two types of decoration from one page to the other. The reverse side of folio 4 contains motifs of small framed palms, while the other side of the same folio 4 exhibits interlaced curved foliage. 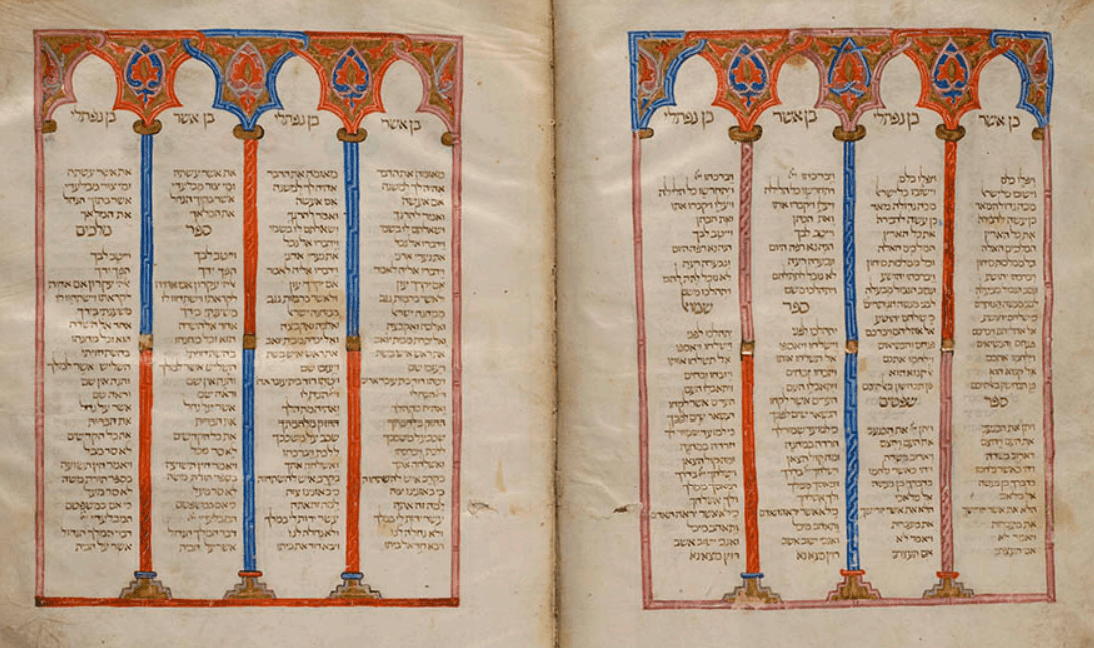 Cutout of a text according to the Parashah
The decoration of the divisional units of the Hebrew Bible according to chapter and verse, or Parashah, are delicately rendered in blue, orangish-red, gold, and pale mauve throughout the entire Pentateuch. The same color scheme is used at the end of numbered books within a golden frame surrounded by stylized blooming foliage, proof of a strong Italian influence. Some more elaborate decorative motifs also appear at the beginning of Joshua in folio 95 (backside), at the end of the Books of Kings, Isaiah, Jeremiah, and Ezekiel, as well as at the conclusion of each Minor Prophet (for example, folio 235: the end of Joel and the beginning of Amos) and of some other books, to the very end of the manuscript. The number of each Psalm is also placed within a decorative motif, sometimes accompanied by birds or a peacock. 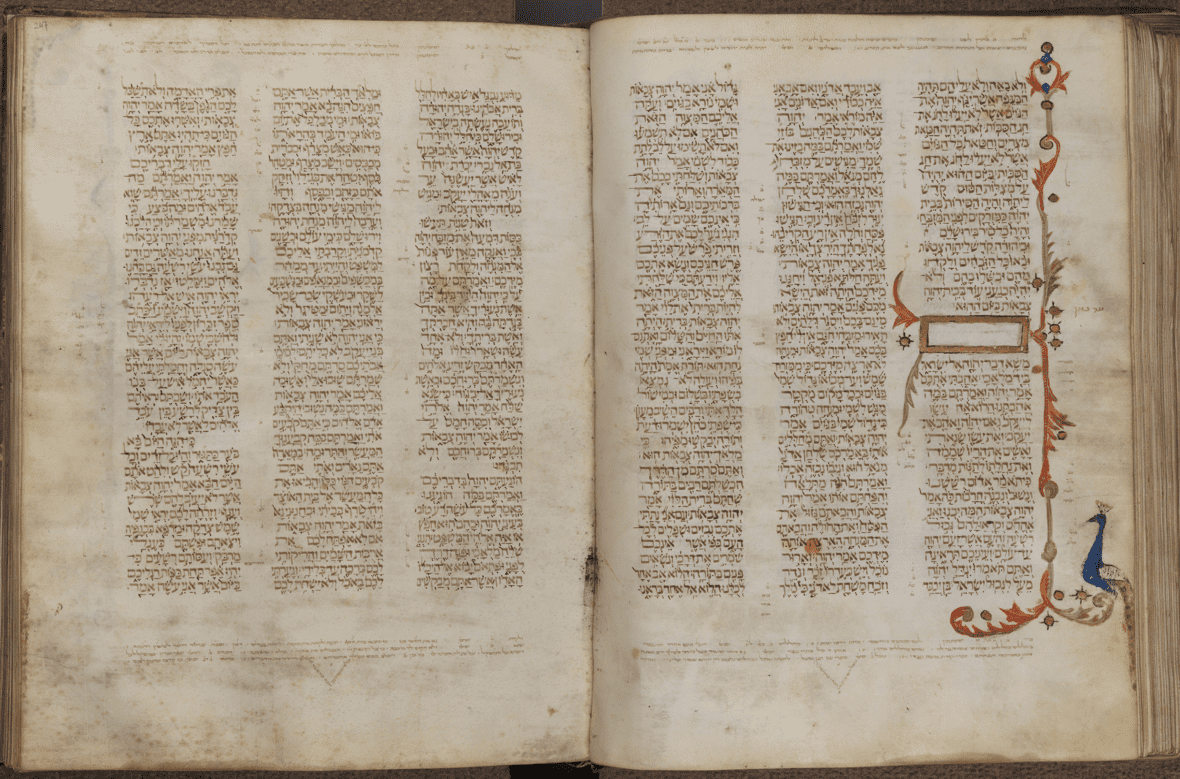 Decorative composition to serve the Parashah

The Masoretic Notations
The Massorah Magna, written in miniature along the margins found at the bottom of the page, is sometimes executed with elaborate designs employing stylized interlaced images of birds, geometric designs, or grotesque dragons. 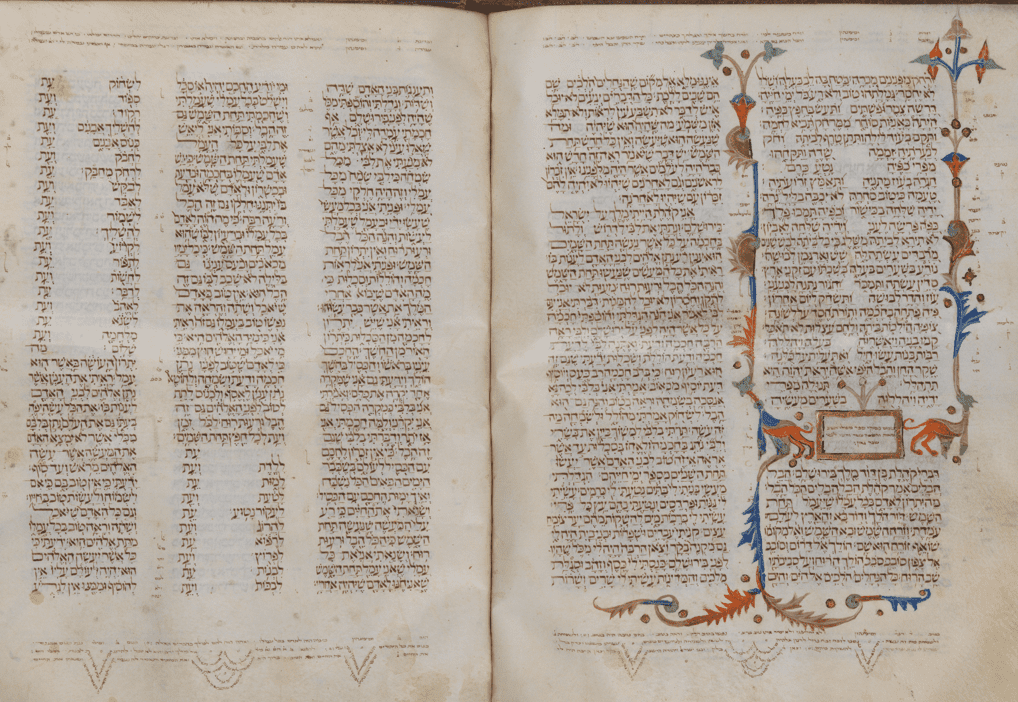 Masoretic notations exist on either side of the text in the form of marginal notes, giving orthographical instructions concerning the vocalization and chanting of the biblical text

Cultic objects from the Temple in Jerusalem
The sanctuary’s vases are represented on the first pages of the manuscript. For three pages the sacred vessels are presented with a variegated red and blue background, in the purist tradition of French Gothic. 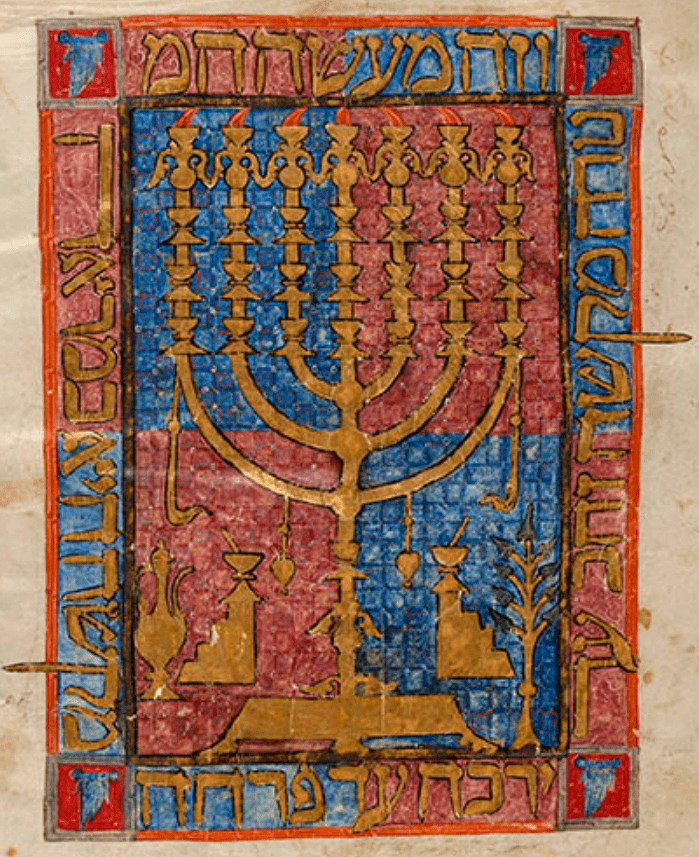 The entire folio 5 (backside) contains the 7-branch Candelabra or Menorah, with its tongs and trowels suspended on branches. On both sides of the Candelabra we see the two staircases which the priest would climb extinguish the candles. Each staircase contains its mortar and pestle. On the right, we can see the burgeoning bush of Aaron which bloomed outside the Meeting Tent in the desert (Numbers 17:8). On the left is a vase in the form of an ewer containing the manna. Surrounding the ensemble we can read in gold letters the biblical verses pertinent to the fabrication of the menorah (Numbers 8:4). 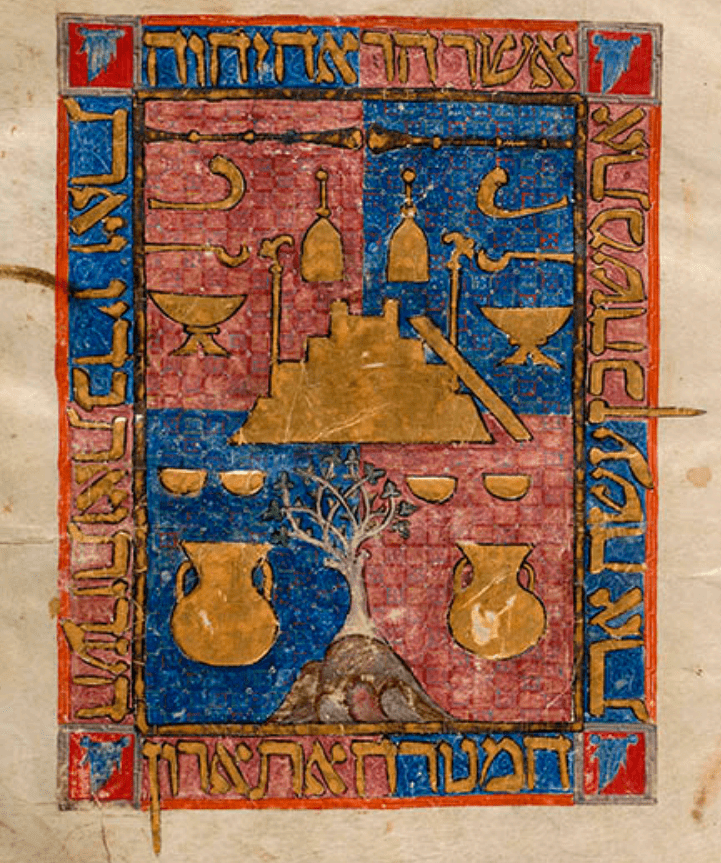 Folio 6 contains the representation of the sacred vessels of the Temple sanctuary, arranged in a symmetrical manner, flanking the horned altar of sacrifice with its pedestrian ramp to the right. They are represented by silver trumpets, the shofar (ram’s horn) and other sacred vessels mentioned in Exodus 27:3, such as forks, trowels, sacrificial perfumes, vases, basins, and the four bowls for aspersion. At the bottom of the page, between two vases, is a tree representing in a stylized manner the Mount of Olives at the summit of which the Messiah was expected to appear. On the surrounding banner, we can read the end of verse 4 in the eighth chapter of the Book of Numbers, as well as the beginning of Exodus 39:35.

On the back side of folio 7, we find the rest of the same verse 35, followed by verse 36 and then the beginning of verse 38 (Exodus chapter 39). We also see other cultic objects which accompanied the Hebrews during their Exodus wanderings, and which would naturally be found in the sanctuary after the construction of the first Temple. At the top of the illustration is the Ark of the Covenant, with its transportation bars, its propitiatories, and two Cherubim. 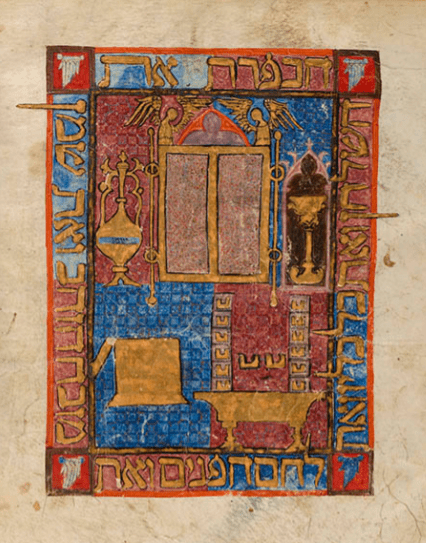 The Ark of the Covenant mounted on two Cherubim

On the right, we see the purification tub on pedestals while on the left we see the jar containing the oil for anointing on which is written shemen, signifying “oil” in Hebrew. This inscription is likely explained by the concern to avoid any confusion with the jar for the manna, which very often has the same form, similar also to the bathing tub seen on the page. Below is found the table for the sacrificial bread as well as the censors. 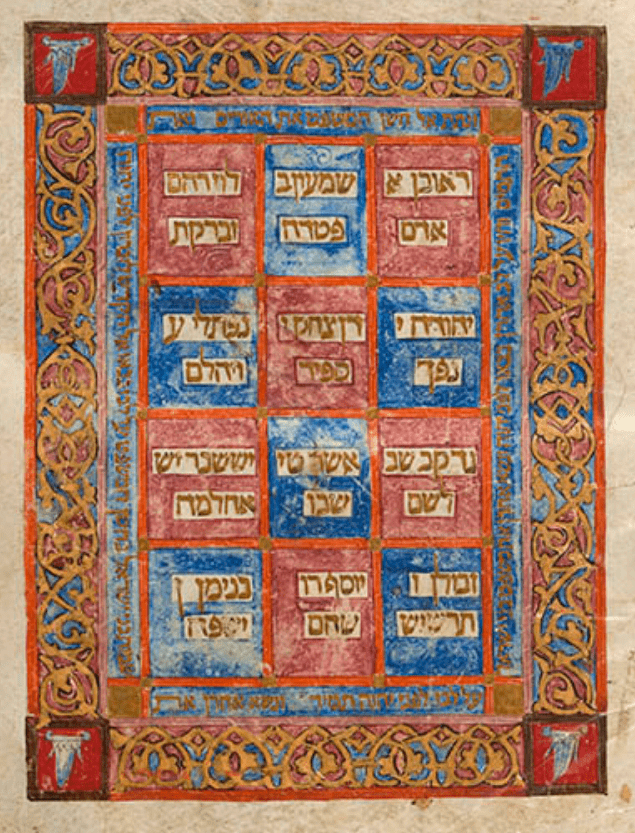 The pectoral tablet of Aaron, the brother of Moses and the first High Priest of Israel

A fourth page depicts the sacred vessels of the sanctuary in folio 8. Aaron’s pectoral tablet (Exodus 39:8-21), also called a breastplate, an artefact rarely represented in Spanish Hebrew manuscripts and even more rarely accompanying the sacred vessels. We can read the name of the 12 tribes of Israel, which the true pectoral plate was, since it contained 12 precious stones representing the tribes. In the Foa Bible, the Hebrew letters illuminated with gold paint are encased within cartouches with alternating red and blue colors. The name of the 12 sons of Jacob is inscribed there according to the order given in the authoritative Targum of Jonathan (Exodus 39 :10-14). The breastplate also contains the name of the Patriarchs associated with the 12 tribes of Israel. In this way the artist follows the Talmudic tradition which affirms that the name of the Patriarchs and the “Tribes of Yeshurun” were both inscribed on Aaron’s breastplate (Hoshen Mishpat). The external border is decorated with interlacing motifs while the interior of the frame contains passages from Exodus 28:30. 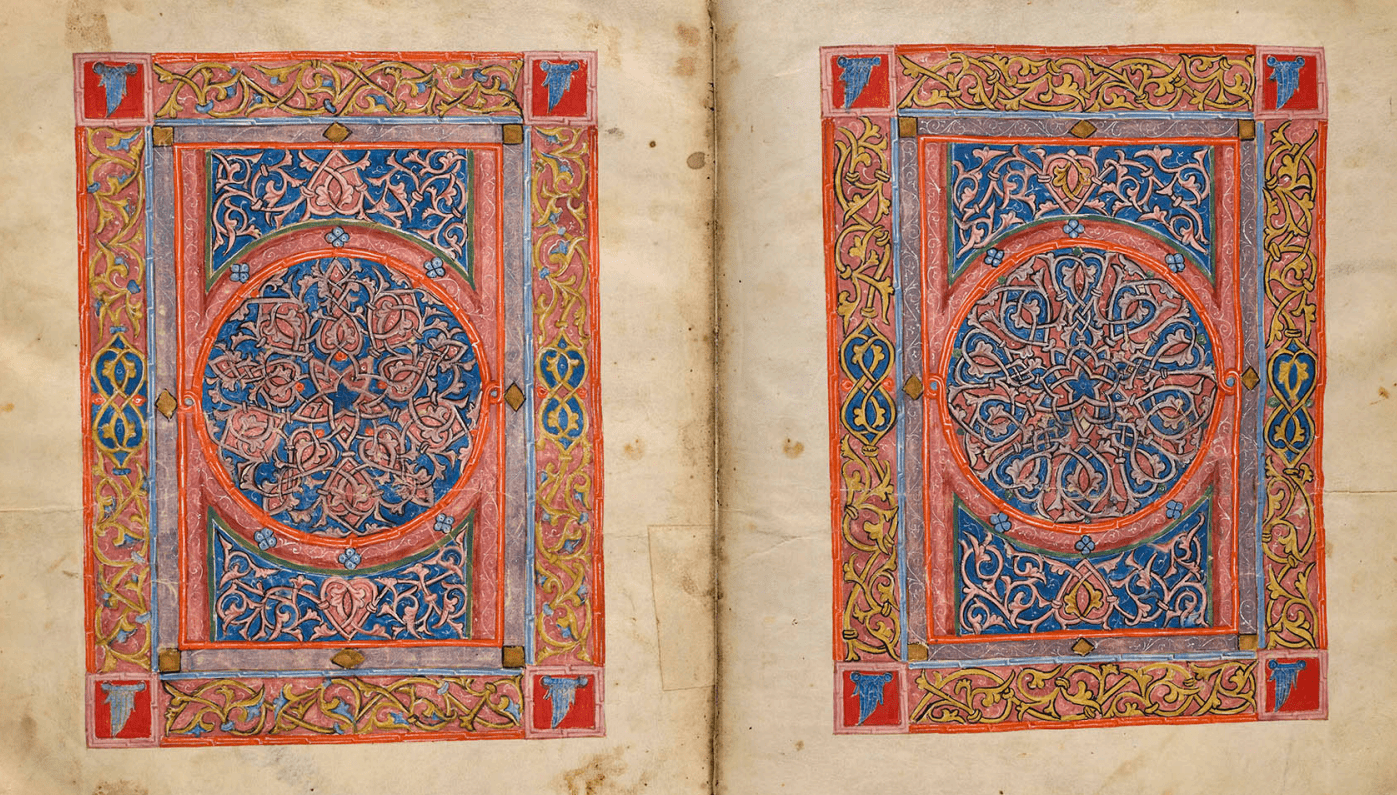 Between the pages representing the sacred vessels of the sanctuary, two pages are inserted that represent decorated tapestries in geometric form and interlaced leaves with a stylized scroll design. The decoration of the two tapestries is almost identical.

The Foa Bible is one of the finest examples of the artistic illumination heritage from Northern Spain. Very close to the Rashba and Farhi Bibles, and to the Parma Bible (MS 2810) or the London Bible (MSS 15250) of the Harley Manuscript (1528), the Foa Bible contains the typical characteristics and elements of the Catalonian school, melding artistic influences in the Arabic-Andalusian, French Gothic, and Italian styles. This openness to multiple European influences helps us situate this manuscript after the reconquest of Catalonia. Moreover, the characteristics it holds in common with the manuscripts we mentioned above permit us to date it between 1360 and 1380 in accord with the illumination workshops of that era which flourished in the region around Barcelona.

Mr Zakaria Hilal, archivist of the Society of St. Sulpice