375th anniversary of the founding of the Society of Saint Sulpice

On 22 January 2017 the parish of Saint Sulpice in the heart of downtown Paris inaugurated the “Year of Olier,” a year-long celebration of the 375th anniversary of the founding of the Society of the Priests of Saint Sulpice at the parish that bears this name. Father Jean-Jacques OLIER, who founded the Society and was a leading figure of the French school of spirituality, was pastor of Saint Sulpice from 1642 to 1652. He was inspired to found the community of diocesan priests dedicated to priestly formation in December 1641, in the midst of a retreat and pilgrimage to a shrine of the Blessed Virgin Mary at Aubervilliers, not far from Paris. He decided to locate his vision in a parish setting, accepting the difficult charge of becoming the pastor of Saint Sulpice, at the time, a very large but rather poor parish under the jurisdiction of the Abbey of Saint-Germain des Prés. Olier and a close circle of clerics proceeded with the project of founding a “seminary” in order to educate Roman Catholic clergy in France. The “little company” became known as the “Sulpicians” because of their foundation in the parish of that name.

Today the Society of the Priests of Saint Sulpice is still very active in initial and ongoing formation of priests on five continents and in fourteen countries. With the inauguration of the Year of Olier, the Society celebrates its long and venerable history of priestly formation. Among the activities planned at the parish throughout the year are various spiritual conferences by experts on Olier or the Sulpicians, and a concert by the titular organist at Saint Sulpice, M. Daniel ROTH. You can consult the (French) poster below for details. The year will conclude on 26 November 2017 with a solemn pilgrimage to the Church of Notre-Dame des Vertus at Aubervilliers, where Olier was inspired by the Blessed Virgin Mary to implement his vision. 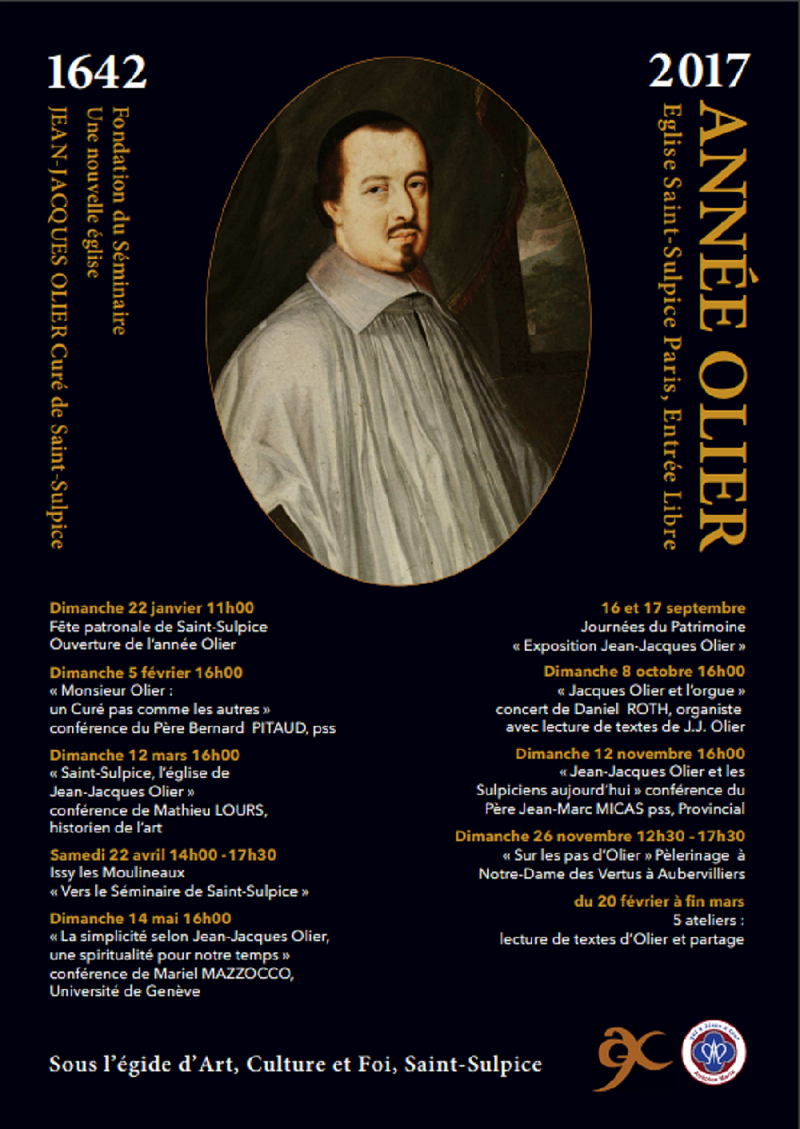